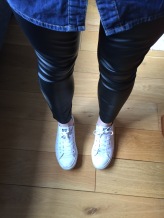 After I had my children I knew that my body would be different, but I was still surprised when it came to dressing myself. It wasn’t just that my pre-motherhood clothes no longer physically fitted me, it was that they mentally did not fit.

Some mums seem to fit seamlessly back into their pre-motherhood persona, just slotting in their small new addition and carrying on as the same person. I didn’t. I was lost at sea.

After having Little Roo I entered the world of the stay-at-home mum. I was incredibly lucky to be in a position where I could stay at home with my daughters, but it was brand new and I was without the identify I had worn since the age of 19 working full time in London.

Pre-motherhood I had always been a confident dresser; I knew who I was, I knew how to dress me. I felt I understood my life, felt I understood my peers. I was happy enough if my clothes drew questions or comments (negative or positive) I enjoyed clothes and used them as a way to express who I was and how I was feeling.

I looked in my wardrobe and everything seemed wrong. My life seemed so far removed from what it used to be it was as though I was looking at someone else’s clothes. Who did I used to be, and was I still that person? How do I begin to dress this body and dress this person that I don’t know? I began to sympathise with the women who turned up at the supermarket and school gates in their pyjamas. Perhaps they too had looked in their wardrobe and just had not known.

A big part of me felt that it shouldn’t matter. How insignificant and superficial to worry about clothes when I have much more important things (people) to care about. And actually, it didn’t matter. It didn’t matter at all – just being in clean clothes was a big enough challenge.

Gone were the days of enjoying dressing myself. Any new clothes purchases were purchases of practicality, rather than a purchase of passion. To work for a person who spent most of her days crawling around the floor covered in food. To hide, to blend in, to not draw attention to me as a mother – a mother who feels like she’s making most of it up as she goes along.

There is nothing wrong with practical choices. Nothing wrong with dressing for your lifestyle. Except that, as the months went by, and my Pinterest style boards filled up with more and more (and more) images it struck me that those people who met me since having little Roo wouldn’t even guess that I ever had any interest in style or fashion unless they followed me on Pinterest. Something was wrong with that. It wasn’t that I cared whether or not people thought I was fashionable, or even whether they liked what I was wearing. It wasn’t about the clothes themselves – it was that there was a part of me that I shut away because I lost my confidence in myself.

These trousers are not a practical choice; they are never going to cut it at soft play – faux leather meeting a sticky plastic slide is only ever going to end in tears. (On the flip side toddler snot and spilled drinks just wipe straight off them.) They are in my wardrobe because I love them, because even though my life has changed, some parts of me can still be the same as they always were.